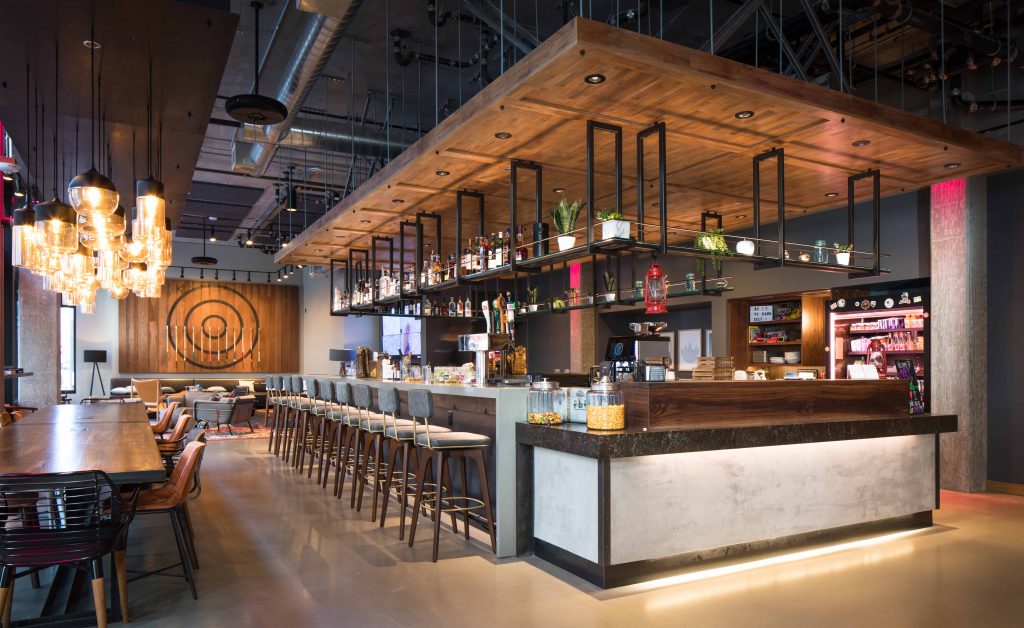 “IT WAS A NO-BRAINER,” says interior designer Casey Scalf, of the decorative inspiration for the Moxy Seattle Hotel in South Lake Union. Scalf (The Society) channeled the Pacific Northwest’s celebrated outdoor lifestyle as the main aesthetic driver for the 146-room hotel—the first of Marriott International’s new boutique Moxy chain—along with Ankrom Moisan architects. “Every Moxy hotel will have a unique twist on what ‘local’ means for that area,” says Scalf. “For the Moxy Seattle, we wanted to embrace what we as locals understand this city to be, and to introduce that to travelers in a way they aren’t expecting.”

At the Kerosene lantern-adorned check-in counter, hotel guests are greeted with a complimentary craft cocktail—the area actually doubles as the hotel’s bar and lounge. Lounge seating is a not-so-subtle homage to the Seattle grunge scene with the face of late Nirvana frontman, Kurt Cobain, flanked with red and black plaid throw pillows. A 14-foot-tall wooden wall extends above and features a full-scale ax installation, each with an individually painted handle. On steel bookshelves above the lobby’s fireplace and wooden teeter-totter bench, you can find books on camping and all things nature. “We wanted to get playful with the Northwest concept but were trying hard not to throw it in your face,” says Scalf.

​As guests make their way up the eight floors of the hotel, they step onto an elevator with an interior Scalf describes as “a rucksack on the back of a giant,” with rough fabric with usable pockets and finely detailed stitching. “Over time it will evolve; Travel patches will be added and it will function as a living art installation,” Scalf says.

Once off the elevator, you pass large-scale graffiti sketches covering the corridors, with design inspo coming from none other than PNW folklore’s most famous character, Sasquatch. The room interiors offer a warm, neutral Seattle color palette of gray, tan, blue, and white. Moxy brand’s signature Shaker Peg for hanging coats is swapped for a nautical steel hook, a Puget Sound design twist. The hooks span the wall accompanied by PNW-themed artwork featuring silhouettes of native wildlife. Guest room headboards, upholstered in material inspired by wax canvas backpacks and outdoor gear, accented with metal buckles and leather straps. Sounds like our kind of campout.